The FluidDynamics Library allows the modelling and simulation of gas flows (e.g. humid air) in three-dimensional spaces. At the boundaries of the grid model local boundary conditions may be defined, which can change transiently or wall and window models can be attached. The maximum resolution of the cubic grid depends on the capacity of the computer hardware and is typically limited to about 1.000 - 2.000 cells. Larger spaces may even be modelled through the definition of symmetry boundary conditions.

The CFD package contains a Modelica-based, three-dimensional grid model. The model is composed of cubic cells. Each cell, which is used to apply the finite-volumen-method, may represent a solid or an air cell. The energy and mass balances are calculated in energy cells, while the mass and heat flows are calculated in the so-called flow cell. Here, the influence of the turbulence, the shear forces acting to the air, the gravity and the buoyancy force is taken into account. By using the Navier-Stokes equations, as found in CFD simulation software, realistic flow conditions can be calculated. 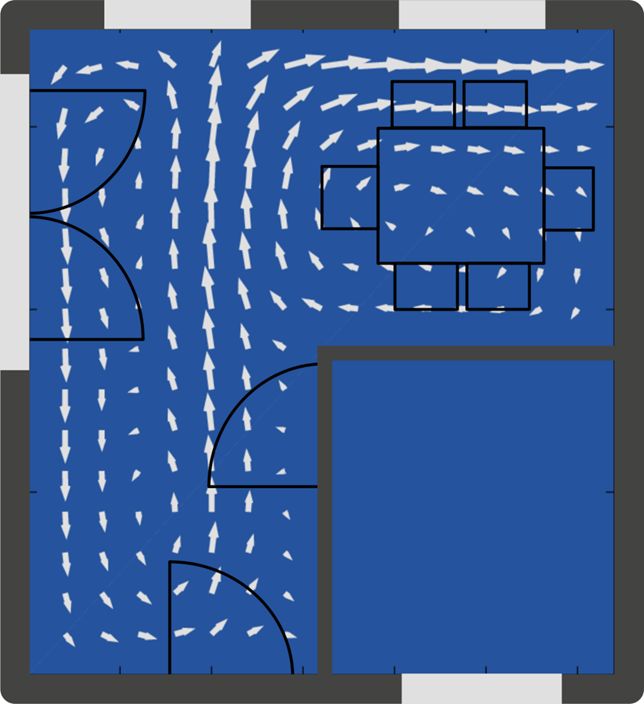 At the edges of the grid standard interfaces allow an easy connection with models from other libraries. Thus, e.g. a whole building can be represented by one-dimensional wall models from the Zones package connected to the interior represented by the CFD grid model. On demand one can easily exchange the grid model with a lumped volume model for the air side. Of course Modelica.Fluid interfaces of the Modelica Standard Library are also available. Moreover, symmetric and periodic boundary conditions can be defined in order to reduce the computational effort for larger rooms.

>Furthermore, the grid model contains all geometric information about the radiation exchange between surfaces. Thus, in advance the view factors to determine the thermal radiation between the surface pairs are calculated by the software, which is required to determine for example internal shading. The spacing and relative orientation of the surfaces are relevant for the exchanged heat radiation.

The Zone Package contains models to develop mobile or stationary applications. Mobile applications will be built with models e.g. for aircraft or vehicle cabins. All models can individually be built and fitted. The Modelica Code is open and not encrypted.

The zone models account for the following physical phenomena:

The integrated weather model is able to read arbitrary weather data and commit it to the zone model. Moreover, the model can convert the intensity of radiation to the effective area according to its spatial orientation. All necessary weather information are bundled and sent to the zone model via a standardized weather connector.

The grid- and post-processing (example see above) is resolved by the included XRG Score light Application. This MS Excel Add-In is available for most common Excel versions.