The humidity on airplanes has several positive but also negative consequences. A more humid air is positively affecting the passenger‘s comfort. At the same time it increases the condensation or the freezing of water on the cold surfaces and in the insulation. So a higher humidity is usually avoided. The condensate increases the weight of the airplane (up to several hundred kilograms for large aircrafts), causes corrosion and moves uncontrollably in the body of the plane (“rain-in-the-plane”). More negative consequences from condensation are:

The main goal of the research project was the examination of different insulation layers by means of numerical simulation. The cabin air humidity was optimized to reduce the negative impacts of condensation. Especially, the water and heat transport, the storage of humidity and the influence of the insulation were analyzed.

Several one- and multi-dimensional simulation models were developed with the modelling language Modelica and the simulation tool Comsol (TUHH). With these models the change of humidity and the increase of weight were simulated. The Modelica library contains the following models of one-dimensional heat and mass transport: 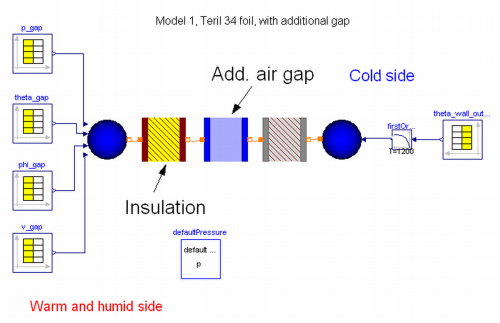 The simulation data was validated with different measurements. A testbench was developed and built at the technical university of Hamburg-Harburg. The increasing humidity of different insulation packages was measured during a simulated flight cycle. The increasing weight was measured continuously (“In-situ-method”). The spatial distribution of the liquid and frozen water in the insulation was visualized in an examination at the research reactor Garching of the TU München. The following picture shows a neutron-spectrography of the water in the insulation, made by Joos (TUHH) and Schillinger (TUM, ANTARES).

The research project Mohicab was funded by the Hamburg Ministry of Economics (reference number HH128) during January 2008 and March 2011.